After a very long hiatus, the Devil’s Dictionary is back and growing again!!! 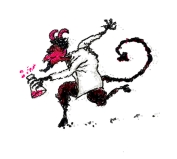 kleptoparasitism  a phenomenon in which one organism attaches itself to the body of another to steal its food rather than going to all the trouble of hunting or shopping on its own. Psychologists believe that many cases of kleptomania may actually be caused by small kleptoparasites hiding on a person’s body, although this has yet to be used successfully as a defense in a criminal case. The term is used metaphorically to refer to in-laws or other relatives who show up for a visit and refuse to leave.

lores  a region of the face between the eyes and bill of a bird, or between the eyes and mouth of other animals. This area is sometimes occupied by a nose. Lore is also used to refer to the back part of the cheeks of insects. If you are surprised to discover that insects have cheeks, and that they are subdivided into functionally distinct regions, well, chalk it up to just another failure of today’s educational system.

Surprising indeed is what happens when one enters the terms “lore cheek insect” into the Pubmed search engine. This delivers an astounding article on the topic “Spider lick,” published in 1961 by the British Journal of Ophthalmology. I highly recommend this classic of scientific research, which begins thus:

“In certain parts of the world and at certain seasons, a number of patients may be seen who show lesions of a character which at once strike one as being unusual and not described in textbooks of ophthalmology, nor in standard student textbooks of medicine, dermatology or tropical medicine. One has only to see a few cases to realize that here are lesions so characteristic as to constitute a syndrome. The lesions may be seen on any part of the exposed skin, but are especially common on the eyelids and contiguous skin of the face…”

The introduction goes on like this for a while and then concludes: “The trivial nature of the condition is probably the reason for the omission of an adequate description in most textbooks, and for the fact that its aetiology is not generally known. In the north-east region of India, where the condition is comparatively common, it is called ‘spider lick’, but it is not due to a spider nor caused by a lick.”

migratory overshooting  at the end of a trip, failing to stop when the GPS announces that you have arrived at your destination. This often results in driving through the back wall of your garage.

mirror-image misorientation  a term used to describe the behavior of birds or other species that migrate in a direction opposite to the normal route. This occurs in animals that get “left” and “right” mixed up, or that have trouble following directions, or are just contrary by nature. The term is also used to refer to humans if they move to a country where people drive on the wrong side of the road, or who leave Texas to spend the winter in Missouri, rather than becoming Winter Texans, as is the natural order of things. Most injuries that occur while shaving are caused by mirror-image misorientation. As well as those that happen while backing up a trailer attached to a car.