Today I’m adding a new feature to the blog: Cartoons on themes related to molecular biology. Scientists, teachers, and others are welcome to download and use the images posted on the blog provided they are always accompanied by the following attribution:

These are usually “insider” jokes that require knowing something about biology, so I will accompany each with a very short text (and yes, having to explain a joke is the quickest way to kill humour… Ah, well…)

(Click on the image to enlarge in a new tab) 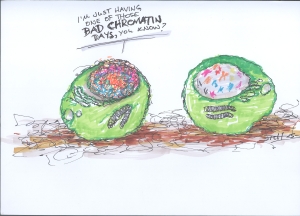 Chromatin is the form of DNA found in the cell nucleus, with a lot of proteins and other molecules attached to it. During phases of the cell’s life when genes are active, chromatin appears in a loose form – like a bunch of yarn spilled onto the floor. (It’s actually highly organised and scientists are currently learning a lot about how the locations of strands are controlled.) Before cell division, chromatin condenses into a tightly packed form – the chromosomes. After cell division it expands again, giving other molecules access to genes so that they can be transcribed into RNA molecules.

Mitosis is a crucial step in cell division. It takes place after the cell’s pairs of chromosomes have been copied. They are split into two equal sets that will form the genomes of the two new daughter cells. This requires pulling them to opposite sides of the cell. Usually this happens when microtubule “tow-lines” reach from the chromosomes to a cluster of molecules at either pole, called centrosomes. Disruptions of this process can lead to daughter cells with an unequal number of chromosomes, a condition called aneuploidy.